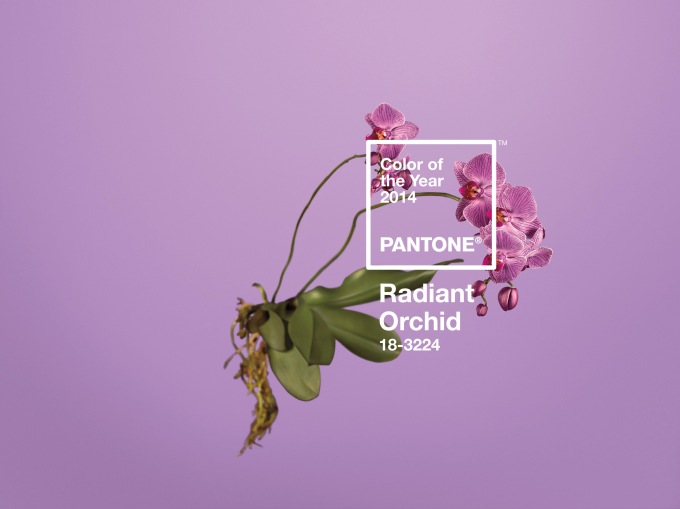 It’s official! The color of the year is “Radiant Orchid!” The soft enigmatic magical lavender purple replaces last year’s Emerald, which in turn pushed the Tangerine Tango off its plushy 2012 throne.
Regardless of how pointless you think this may be, there is a lot of hard work and many people and influences behind this decision.
Pantone, the world’s leading authority on color and its “Color of the Year” has influenced product development and purchasing decisions in multiple industries, including fashion, home and industrial design, as well as product packaging and graphic design.
And it’s not like they just pick a color from a box of crayons.
The color of the year selection requires careful consideration. To arrive at the selection, Pantone quite literally combs the world looking for color influences. This can include the entertainment industry and films that are in production, traveling art collections, hot new artists, popular travel destinations and other socio-economic conditions. Influences may also stem from technology, availability of new textures and effects that impact color, and even upcoming sports events that capture worldwide attention.

“While the 2013 color of the year, PANTONE 17-5641 Emerald, served as a symbol of growth, renewal and prosperity, Radiant Orchid reaches across the color wheel to intrigue the eye and spark the imagination,” said Leatrice Eiseman, executive director of the Pantone Color Institute. “An invitation to innovation, Radiant Orchid encourages expanded creativity and originality, which is increasingly valued in today’s society.”

“I know the album format is a dying breed,” Starkey admits in the interview, and I cannot help but agree with him. But rarely can you disagree with one of North America’s top bass music aficionados, known for his musical arrangement skills and high standards in production quality. And as one of the first North American representatives for bass music, Starkey understands the world of electronic music. He also knows that it revolves around the dance floor; where singles and EPs have become the dominant format because of their relatively short production time.

With his album Orbits, the newest entry in a discography started in 2005, Philadelphia-based producer Starkey has gone against convention by creating an album which functions as a cohesive unit and not just a collection of songs. He’s accomplished this by moving away from the dancefloor and into new territory.

“There’s been some groups that have been successful doing that, and usually it’s not with purely dance floor music.”

Starkey cites The Prodigy as a group that’s been able to make an album with big dance floor hits while still having songs with a powerful listening experience.

“If I’m going to sit down and make an album, and not release a series of singles, or EPs or whatever, I want it to be something that can stand in that world and be something that can exist in both worlds,” Starkey comments in regards to his thought process. “There’s music that can be played in clubs, then there’s stuff on there that probably doesn’t lend itself to that environment very well.”

For Orbits accomplishing this saw Starkey deviating from the traditional DJ-friendly format.

“I think I’ve always been interested in developing song structure away from dance music’s pattern, like ‘intro – drop – break – second drop ’ mentality,” he says. “I’ve always been that way but I think on this album I just let it go even more so […] I didn’t really think about what the structure of the song was until it was done, and then it felt like a completed piece of music.”

Starkey, who has always been more interested in “writing songs than beats” studied music production in 2001, which was followed up by an internship at a London music studio. It was here during his time in the UK that he discovered a genre that many critics associate with his music: grime.

“When I was living [in the UK] ‘The Streets’ first single came out, ‘Has it Come to This’ which is obviously a little more experimental on the side of that [vocal] garage sound,” explains Starkey over the phone. “There was actually some b-sides that Mike Skinner put out that were a little more grime leaning, a little more hip-hop leaning. Obviously I hadn’t heard the word grime – it’s 2001 so no one was really using that term yet. [So] I kind of kept in touch with what was going on when I came back to Philly. That kind of evolved into me finding out about the pirate radio scene in London, and people like Nasty Crew, Roll Deep, all that stuff.”

At the time he discovered grime, Starkey admits that his productions more closely resembled electronica and IDM.

“Once I heard a lot of what was going on with the grime scene it just kind of changed my opinion on what I could do musically.”

Starkey enthuses about grime’s huge influence on his production stating that it was the rawness of the sound and the elements that attracted him to the genre.

“A lot of it was produced on really crude equipment, crude computers, sometimes even on like video games and stuff like that,” Starkey explains. “So I think that lack of production expertise, just that rawness of ‘let’s just play with these sounds that we have and create something new,’ I was inspired by that and took that and applied it to the music I’ve been doing ever since.”

While Starkey’s music incorporates many grime elements it also avoids genres by incorporating elements from urban music around the globe, and from the dozens of other genres that have influenced Starkey over the years.

“Because my music doesn’t necessarily fit in a certain pocket as neatly some other people, my music will always be tagged with different buzzwords depending on what’s ‘cool’.”

In 2006 Starkey and Seclusiasis label-mate Dev79 made the decision to avoid buzzwords by creating one of their own: “Street Bass.”

“[Dev79] just said the word ‘Street Bass’ one day I was like, ‘wow that actually sounds kind of cool, why don’t we just throw street bass on the flyer and throw a party to see what happens,’” says Starkey.

“That was the time when people would love throwing out genres, and there’d be like 12 genre names on a flyer trying to entice people to come out to a party.”

After six years and five “Street Bass Anthems” compilations, the term has outlasted many fleeting buzzwords and trends, and for Starkey, the words Street Bass don’t define a sound, but rather an ideal.

“I think it’s a good attitude and a good way of explaining our approach to DJing, and our approach to how we want to present musically, in general, in a broad scope, it encompasses a bunch of different genres.”

Starkey is a figure marked by deviation, and every deviation he’s made, be it with song structure or content, has helped him stand the test of time.

“There’s a lot of people doing music that has a certain time period associated with it, I don’t want to get in that rut.”

“I’m into that idea of having something that is unique and interesting, it doesn’t necessarily have to sit in a certain time-period. I really like to have stuff that sounds like 2012, but it’s moving on and constantly growing and evolving. That’s what’s important to me.”

Via FREQ Magazine by Jonathan Crane